The Bruno Balke Biodynamics Laboratory in the Department of Kinesiology was named in honor of Dr. Bruno Balke, Ph.D., M.D. in 2011 to honor the significant contributions Dr. Balke made to the University of Wisconsin-Madison, the Madison community and to the entire field of exercise physiology. 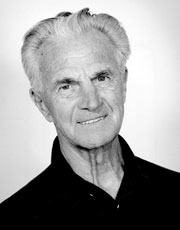 Bruno Balke was born September 6, 1907 in Braunschweig, Germany.  He completed his medical degree at the University of Berlin and was then recruited as the team physician for a German expedition to the summit of Nanga Parbat, a Himalayan mountain cresting at 26,700 feet.  This experience inspired his life-long interest in human performance under extreme environmental conditions.  During WWII, Dr. Balke served in the School of Mountain Rescue in Tyrol where he studied the impact of environmental factors such as cold, heat, and altitude.  He completed his Ph.D. on physical performance capacity at high-altitude in 1945.  In 1950, Dr. Balke was recruited to join the staff of the United States Air Force School of Aviation Medicine in San Antonio, TX.  He directed many significant human performance studies on U.S. airmen with interventions of bed rest, blood loss, altitude and hypocapnia.  Also, during this time, he framed the rationale for “aerobic training.” From 1960-1964, Dr. Balke headed the Human Biodynamics Section of the Civil Aeromedical Research Institute of the Federal Aviation Agency in Oklahoma City.  Here, he performed pioneering research on exercise intervention and testing in coronary artery disease.  As a result of his work, heart patients now follow an exercise rehabilitation program rather than bed rest.  In 1964, he accepted a position as Professor of Physical Education and Physiology at the University of Wisconsin-Madison.  Dr. Balke retired from the University of Wisconsin in 1973, but continued to contribute to the profession until his death in 1999 at age 91.

Dr. Balke’s Contributions to the University of Wisconsin-Madison and Community (1964-1973)

In summary, Dr. Balke was a visionary in terms of the application of physiology to many different problems:  high-speed flight, performance at altitude, performance of elite athletes, and fitness programs for ordinary adults and cardiac patients.  He published in all these areas and made lasting contributions.  Probably his most important contribution was training graduate students who have become leaders in the field of exercise physiology multiplying his impact on the profession.

This website uses cookies to improve your experience while you navigate through the website. Out of these, the cookies that are categorized as necessary are stored on your browser as they are essential for the working of basic functionalities of the website. We also use third-party cookies that help us analyze and understand how you use this website. These cookies will be stored in your browser only with your consent. You also have the option to opt-out of these cookies. But opting out of some of these cookies may affect your browsing experience.
Necessary Always Enabled

Any cookies that may not be particularly necessary for the website to function and is used specifically to collect user personal data via analytics, ads, other embedded contents are termed as non-necessary cookies. It is mandatory to procure user consent prior to running these cookies on your website.