Former Badgers football standout and current Miami Dolphins linebacker Vince Biegel will be wearing a special set of cleats during Sunday’s game against the New York Giants that will spotlight — and eventually help raise funds for — UW–Madison’s Adapted Fitness program.

“The University of Wisconsin and the Adapted Fitness program are both very special places to me,” says Biegel, who played for the Badgers from 2013 to 2016, and started his pro career with the Green Bay Packers in 2017. “To represent this great cause in this way is both pretty cool and really an honor.”

Biegel is taking part in the NFL’s My Cause My Cleats initiative, in which players reveal their passions beyond the game and showcase causes important to them that are then represented on custom-designed cleats.

The cleats Biegel will be wearing were produced by South Florida artist Marcus Rivero, who runs his own custom cleats painting business, Soles by Sir. The cleats will ultimately be donated to the Adapted Fitness program, which will auction them off as a fundraiser (stay tuned for details to come). 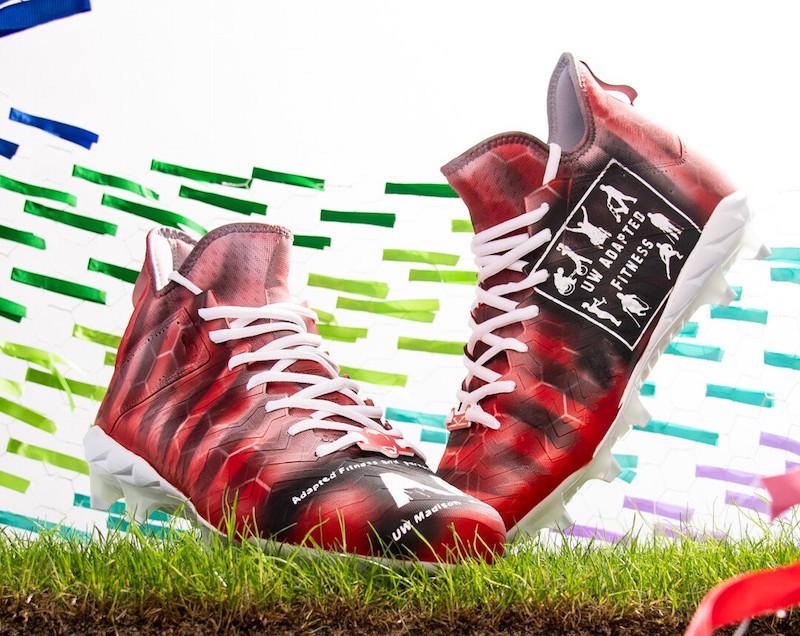 The Adapted Fitness program, housed in the School of Education’s Department of Kinesiology, helps individuals from the community with a range of disabilities establish a healthier lifestyle, become more independent, enhance functional fitness, and participate in sports and other recreational activities.

The Adapted Fitness program also provides academic coursework and service-learning opportunities for UW–Madison students who work with the program’s clients.

This work is vital because federal reports indicate about one in five Americans have some type of disability, with mobility issues being the most common form. People with mobility restrictions can face an especially difficult time staying active. In addition, there is an urgent need for professionals that are trained and experienced working with this population in keeping people moving and healthy.

The program, which was started by former UW–Madison Distinguished Faculty Associate Tim Gattenby, has long focused on the importance and value of not setting limitations. Students typically come out of this coursework with a very different philosophy and attitude toward working with people with disabilities. With Gattenby’s retirement this past summer, the Adapted Fitness program today is led by Kecia Doyle.

Biegel first heard about the Adapted Fitness program through his wife, Sarah Biegel. The two met in Madison as college students, and Sarah was involved with the program while pursuing her BS through the School of Education in rehabilitation psychology.

Sarah says she originally became involved with the Adapted Fitness program because it was part of her coursework. But over the years, she remained involved as a volunteer because the work was so meaningful to her.

“It’s this really unique program and atmosphere where you can’t help but leave an adapted fitness session and be inspired — either for your own self or for the clients,” says Sarah, who graduated in 2015. “It became this place where, even after I graduated, it was very hard to leave because it’s such a special community. You want to keep giving back.”

Vince says he first stared taking notice of the Adapted Fitness program while at UW–Madison because of how much it meant to Sarah. He became more deeply involved with the program when a good friend from both high school and college, John Arendt, got into a serious vehicle accident in 2018 that left him with physical limitations.

Arendt had been big into downhill skiing before the accident, and Vince and Sarah connected their friend with Gattenby and the Adapted Fitness program. That led to Arendt getting fitted with an adapted ski chair that allowed him to eventually go on a skiing trip to Colorado.

“The Adapted Fitness program really allows people to see their potential — and then help them achieve it as well,” says Sarah.

In the summer of 2018, Vince and Sarah visited the UW–Madison campus, checking in one afternoon on the No Limit Kids Fitness program — an adapted fitness program for disabled children ages 7-17. Children with physical disabilities have very few opportunities to participate in physical fitness and recreational sports and activities, and this program provides many avenues to exercise and just have fun.

“It was a really fun day to hang out with the kids and have a water balloon fight and meet some of the UW-Madison student volunteers with the Adapted Fitness program,” says Vince Biegel, who grew up in Wisconsin Rapids, Wisconsin. “UW–Madison is a special place and I always enjoy going back.”

Biegel has overcome some significant obstacles over the past year-plus — and on Nov. 19, he was promoted from the Dolphins’ practice squad to their active roster. Biegel sustained a torn Achilles tendon in training camp in the summer of 2020, ending his season. Biegel was again put on injured reserve in training camp prior to the start of this season, before making it all the way back late last month.

“I’m just really grateful to be back,” says Vince Biegel.  “And to be able to wear these cleats and represent the Adapted Fitness program is a great bonus.”

This website uses cookies to improve your experience while you navigate through the website. Out of these, the cookies that are categorized as necessary are stored on your browser as they are essential for the working of basic functionalities of the website. We also use third-party cookies that help us analyze and understand how you use this website. These cookies will be stored in your browser only with your consent. You also have the option to opt-out of these cookies. But opting out of some of these cookies may affect your browsing experience.
Necessary Always Enabled
Necessary cookies are absolutely essential for the website to function properly. This category only includes cookies that ensures basic functionalities and security features of the website. These cookies do not store any personal information.
Non-necessary
Any cookies that may not be particularly necessary for the website to function and is used specifically to collect user personal data via analytics, ads, other embedded contents are termed as non-necessary cookies. It is mandatory to procure user consent prior to running these cookies on your website.
SAVE & ACCEPT